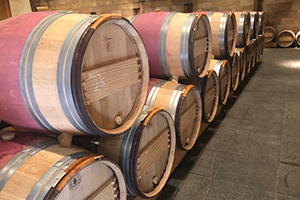 It was a pleasure to be back in Bordeaux last month revisiting many grand chateaux, to taste and to discuss the merits of the 2021 En Primeurs with their owners and vignerons. After three outstanding vintages in succession, 2021 was predictably less consistent. However, there were some beautifully balanced approachable wines made, using only the finest selected fruit and modern gentle winemaking techniques. Great wines are only made when there is great attention to the details. The mission of our campaign is to seek and carefully choose those performers that best express the quality of their terroir and seem fairly priced when compared with similar available vintages.

This was a challenging vintage for the vigneron who had to deal with spring frost damage to their prematurely advanced buds in April, then heavy rain showers in May and June which promoted the onset of mildew, more showers in September but generally dry and fair weather through to harvest in early October. The best Médoc terroirs close to the Gironde were less affected than those further inland, such as Graves and around St Emilion. Some chateaux lost half their usual productions, especially those practicing organic viticulture; such as Pichon Lalande with just 15hl/ha yields instead of the usual 42 average.

The later ripening Cabernet Sauvignon, Cabernet Franc, and Petit Verdot grape varieties excelled in this vintage, more so than the thinner skinned merlots. However, there are always exceptions where the site, time of harvest, and rigorous vineyard work paid off. The white varieties of Sauvignon and Sémillon were picked from early September to retain fresh acidity and fruit intensity. Several harvest tries amongst the top estates produced some rich opulent dessert wines from Sauternes and Barsac.

Some critics are comparing this vintage to some of those of the 1990s and 1980s, such as 1985 and 1996. The only similarity is that they are classically styled with similar acidity and alcohol balances, ranging between 12.5 and 13.5%. Some even had to chaptalise to reach these levels. The better chateaux have a solid core of naturally ripe fruit, refreshing acidity, and velvety-textured tannins.  The wines are more focused today, with pure precise fruit, using infusion to gently press the grapes and less oak during the élevage. This is a neo-classic vintage nearer to the 2017 and 2008 stylistically but with better balance. It is hard to place this unique and complex vintage. There were a few wines that were trying too hard to achieve body and structure, at the expense of concentrating the less ripe tannins, undesirable green herbal flavours, and sappy fruit acids. Fortunately, these exceptions stood out amongst many very well-made wines. Recalling our primeur tastings in the 1990s, the reversal was common in those days. Nowadays, there are more good to excellent wines than rustic or unbalanced.

This was the most successful vintage for the dry white wines since 2017. They best have intense aromatics, piercing citrus fruit, bracing acidity, and depth on the finish. Our favourites were Haut Brion Blanc, Pavillon Blanc, Domaine de Chevalier, Pape Clément and Smith Haut Lafitte. The vintage was tiny for Sauternes and Barsac which recorded some of the lowest yields to date, such as Suduiraut with 1hl per hectare (less than 500 cases). Coutet, Fargues, and Tour Blanche were also among our highlights.

Finally, it will be a vintage worth buying in advance but only where there is genuine value for money. The market is not concerned about small productions or intensive efforts required to achieve the desired quality. They won't pay a premium whilst there are plenty of fine recent vintages physically available.  We will offer our selections as they are released.