You are in: Home  > Saint-Julien > ChÃ¢teau Ducru Beaucaillou 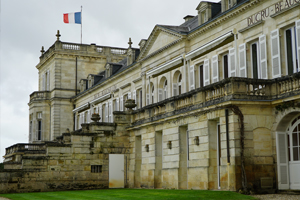 Named after the large stones found on its land (beau=beautiful, caillou=stone), the estate’s history starts in the 13th century, once part of the Beychevelle estate.Sold in 1795 to Bertrand Ducru, the new owner added his name to the estate, becoming 'Ducru-Beaucaillou'. Ducru's daughter, Marie-Louise, married Antoine Ravez, a junior minister and member of parliament from 1816 to 1829. Apparently she replaced the glass of water traditionally given to orators with some Ducru-Beaucaillou. The Ducru family sold to the famous negotiant Nathaniel Johnston and his wife Lucie-Caroline Dassier in 1866 and then after the 1929 crash the property was sold to the current owners, the Borie family. Since 2003 Bruno-Eugène, has managed the estate and has helped rebuild the cellars after problems with TCA in the late 1980s. The best wines often possess a powerful, silky textured style that touches on first growth quality, especially in great vintages like 1961, 1982, 2000, 2009 and 2010.