You are in: Home  > Pessac-LÃ©ognan > Château Haut-Brion 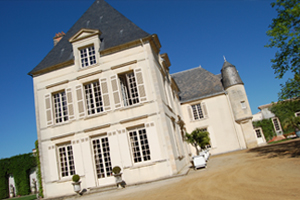 The only First Growth found outside the Médoc and surrounded by Bordeaux suburbs in the north of the Pessac Léognan AC.  Owners Domaine Clarence Dillon also make great wines at Château La Mission Haut-Brion. The key to the quality of the wines are the finely drained gravel soils with vines planted at a slight elevation. Smaller than many Châteaux in the Médoc with  just over 48 hectares planted to Cabernet Sauvignon, Merlot, Cabernet Franc and Petit Verdot. The remaining plots consist of roughly equal proportions of Semillon and Sauvignon Blanc, from which one of the World’s greatest  whites is made. Haut Brion Blanc has an intense, subtle aromatic quality when young and take on a rich dimension over many years. Barrel-fermenting in oak is carefully judged, generally only 50% and then ageing in barrel for 9 to 12 months. The red can be very plush and opulent with often higher alcohol than encountered in the Médoc. The impressive second wine has been labelled La Clarence de Haut-Brion since 2007 and a second white La Clarté de Haut-Brion is also made. Much credit too must go to the Delmas family who have acted as estate managers.
Wine