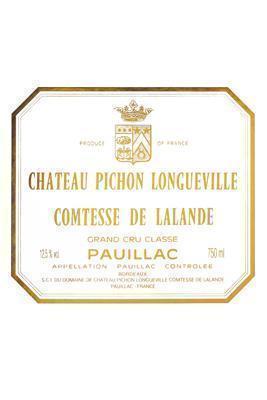 "The 1996 Pichon-Lalande is just as awesome from bottle as it was from multiple cask tastings. For Pichon-Lalande, the percentage of Cabernet Sauvignon is atypically high. This wine normally contains 35-50% Merlot in the blend, but the 1996 is a blend of 75% Cabernet Sauvignon, 15% Merlot, 5% Cabernet Franc, and 5% Petit Verdot. Only 50% of the estate's production made it into the grand vin. The color is a saturated ruby/purple. The nose suggests sweet, nearly overripe Cabernet Sauvignon, with its blueberry/blackberry/cassis scents intermixed with high quality, subtle, toasty new oak. Deep and full-bodied, with fabulous concentration and a sweet, opulent texture, this wine was singing in full harmony when I tasted it in January. Given the wine's abnormally high percentage of Cabernet Sauvignon, I would suspect it will close down. It possesses plenty of tannin, but the wine's overwhelming fruit richness dominates its personality. Anticipated maturity: 2004-2025." Robert Parker